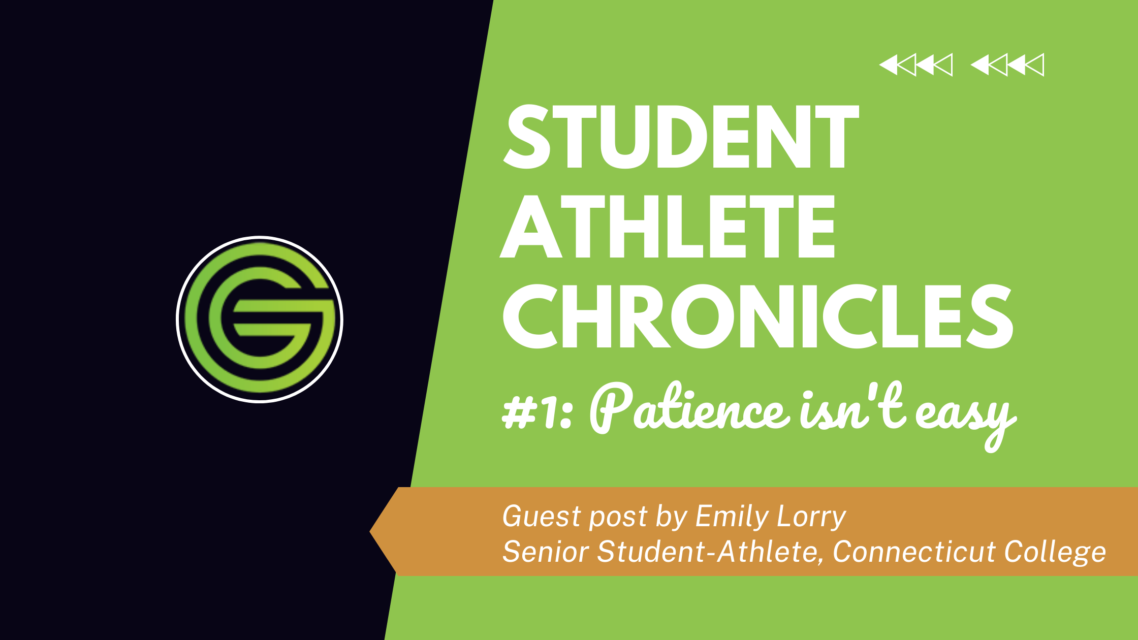 Standing on the sideline with my warm ups still on, my throat burning from choking back tears, and my hands balled into fists in my coat pockets, I watched my college team finish our final game of the season against Wesleyan. An entire ninety-minute game, including two over-time periods went by without me stepping foot on the pitch. As the seniors grieved about their soccer career being over, I let out a little sigh of relief. I was both thrilled and depressed to be finished with the season that led to me losing my passion for soccer.  I sauntered over to my mom across the field and when she wrapped me in her arms I became overwhelmed and started to cry. She whispered into my ear, “You are going to laugh at this moment in a few years. Just wait, things will change.” I thought there was no way that could be true.

When I entered my first year of college, I anticipated that I would start each match and play every minute of every game. In short, I thought I would come in and be a star from day one. Now you might be wondering why I had such immense confidence. Well, I had played for, and started on, the best club soccer team in my state, competed in the national league, won three state championships, won several awards for high school, and been captain of my high school team my senior year. While all of those things were great accomplishments, what I failed to recognize was that they did not guarantee me a starting spot on my collegiate team. In fact, I only started one game my first year. I was shocked and disheartened to say the least.

Mid-way through the New England Small College Athletic Conference (NESCAC) season we were set to play an away game against Hamilton College . We left on a Friday and stopped along the way to scrimmage Union College. While they played, the first team prepped for the upcoming NESCAC game. I was supposed to be practicing with the first-team, however, my nerves had gotten the better of me and I felt sick to my stomach. I laid on the ground and memorized the set pieces that my teammates were practicing.

The next morning, game-day, I was ready to play. We arrived at the field and I warmed up fully, prepared to put in a solid shift whenever I got into the game. Only I never did. It was my first collegiate game that I was benched for the full ninety and to make matters worse, we lost. After my coach finished his post-game speech, I stormed off to be with my parents who had driven all the way up from Pennsylvania to watch me stand on the side-line. I was furious. I had a full-blown meltdown – crying and yelling to my parents about how I deserved better, how I was better than my teammates and how unfair it was that the coach benched me. While my mom consoled me, my dad looked on with disapproval. Once I had calmed down he came over and put his arm on my shoulder, “I know you are upset, but you are being a bad teammate right now.” I told him that I did not care to which he responded, “Your coach will though.”

The entire bus ride home I sulked in my seat. I put my headphones in, pulled my hood up over my eyes and refused to speak to anyone. When we arrived back at campus, my senior captains asked me to stay behind. They told me that my behavior was unacceptable and that I needed to come back tomorrow ready to play against Colby with a better attitude. I tried to explain to them that my behavior was warranted, but they did not agree. “We have all been there. Freshman year is hard, you will get your turn” one of them said. Her words, while true, did not resonate with me at the time.

Despite my frustrations, I woke up the next morning ready to make my coach regret that he didn’t play me the day before. I felt great in my warm-ups, my touches were clean and my legs were loose. Just as we came in for a huddle, my coach pulled me aside, “Are you feeling better today?” I tried not to let my frustrations from the previous day carry over, “Yeah, I am good. I just want to play.” I responded. He patted me on my back and said, “Cool.” Then he walked away. While I did not start, I ended up getting decent minutes and having an assist. I was content with my performance and was certain that my coach would never make the mistake of benching me again. However I was wrong. I was benched for the full ninety for two more games that season. As the season drew to a close, my attitude declined along with my minutes on the field.

At the end of our season each player had an individual meeting with our coach. Most of my teammates’ meetings lasted approximately fifteen minutes… mine took an hour and a half. My coach began the meeting asking me how I thought the season had gone, “It was okay. I think there is room for a lot of improvement next season.” I responded. He appeared confused. “What made it just okay?” He questioned. “I only started one game… I would like to start every game next year.” I explained. He did not seem to be of the same mind, “You were the first sub off the bench for most of the season and got the third most amount of minutes of your class. I see that as a win. ” I was baffled by how he could possibly think that my season was a good one, “You benched me for three games. Three full ninety minute games, Coach.” His face grew cold, “You were sick during the Hamilton game. How could I put in a player who was not feeling her best during a game that we needed to win? In the Amherst game, we needed to play our biggest players. Unfortunately, that is not you. They are a physical team and being physical is not your strength. The team comes first.” Our conversation went back and forth until I had to go to class. I ruminated on my meeting with my coach for months.

It wasn’t until my Sophomore season that I understood what it meant to put the team first. We were at our game against Colby, our first NESCAC game of the year, and I was starting at outside back. In fact, I had started the two previous non-conference games as well. However, nerves were high for this first league game, my team was not connecting, and after roughly twenty minutes went by in the first half, my center back and I were subbed off the field. As I came off of the field my head coach patted me on the back and handed me a pinnie to put over my jersey. I took my place on the sideline and watched the rest of the half finish up. Half-time rolled around and I remained on the bench. We were down 1-0 and all I wanted was to help my team beat Colby. With seven minutes left to play our center midfielder threaded a beautiful ball through to our forward who ran onto it and scored to tie up the game. The entire bench, including myself, erupted in cheers. Five minutes later, we scored again to win the game 2-1 and when the final whistle blew, I felt nothing but sheer joy for my team. It was extremely important that we won that first NESCAC game as it set the tone for the rest of the season. My coach congratulated us all on our performance and we headed up to the locker room. After I had finished showering I walked back outside to join the tailgate and to watch the men play their game against Colby. As I sat there, my assistant coach joined me on the hillside, put his arm around my shoulder and said, “I know you were disappointed with your playing time today but the way you carried yourself was phenomenal. Good stuff buddy.” My mouth was full with food, hence, I was unable to respond but he continued, “Last year you would have pouted. It was awesome to see you celebrate the win with your teammates. Keep working hard and proving you belong on the field and it’ll all work out.” I thanked him and he left. I realized that despite being displeased with my playing time, I had found a way to be excited for the team’s success. In that moment, I understood that the way that I had acted my freshman year was uncalled for.

My sophomore season I started fourteen out of sixteen matches, scored the go-ahead goal against Bowdoin, played the majority of each game, and learned how to be not only a better player, but a better teammate. Even in games where I could have gotten down on myself after not playing as many minutes as I had hoped, if we won, I felt happy. I learned to root for my team rather than solely for myself.

As athletes, we tend to be extremely competitive, goal-oriented, and at times concerned more with ourselves than with others. What I have learned since being in college and competing s that it is about more than the individual player. Of course, each player strives to perform their best, start, and have a major role on the team. But, it is more important that the team succeeds than the individual succeeds. For example, looking back at the Hamilton game my freshman year, my coach could never have put a sick player out on the field. Even though I thought I was feeling fine, he did not. It is the coaches job to put out the best, healthiest, fittest eleven players onto the pitch in order to win the game. Despite the fact that I wanted to play, it was more critical that my team perform well that game than for me to play. Additionally, when your team wins it is imperative that each player focus on the group’s collective achievement rather than being concerned with their own.

Now, as I enter my senior year as a captain, I understand the college process much better. I can see much clearer how hard it is for freshmen to come in and get big minutes. The college game requires players to be much more physical than competing at the club level in high school. Freshmen who are only eighteen years old and used to competing against other eighteen year olds, now must physically battle against girls who are twenty two. It is a process. One that takes time. Each player’s process will be unique to themselves, we are all running our own race. Some players are able to come in and earn a starting spot while others won’t start until their Junior or Senior season. Athletes improve on their own time and that is okay. What is not okay is to put yourself before your team. Being a good teammate means encouraging your team, competing with your teammates instead of against them, and putting the team first.